Commission for a couple of divine divas 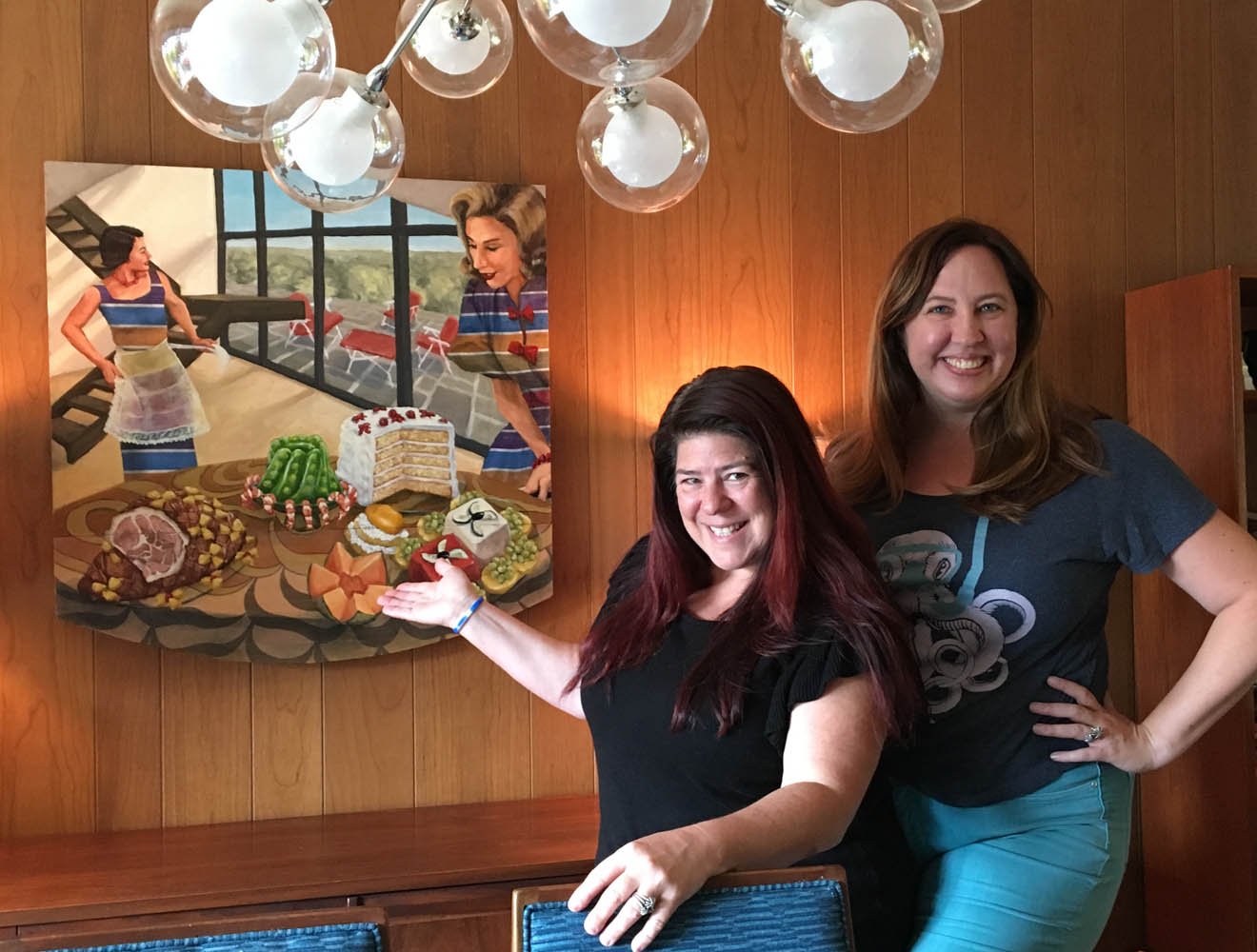 The themes of house, home, and the American Dream of owning one recur so often in my work, it seems natural that people in the businesses of building selling homes would gravitate to it. For example, one of my earliest collectors and supporters was the late real estate goddess Jan Sewell. Her niece now has possession of the appropriately-titled This is the House You Ordered:

This is the House You Ordered

Last year, while I was in the process of scanning old slides and organizing my archives, I posted some older work on Instagram, including this painting:

A Wonderful World of Your Own

My friends Kim and Chavi, the dynamos behind Team Diva Real Estate, saw it and wanted it to hang in their own wonderful world. Alas, the painting had been sold in 2009 by a California dealer. I suggested to the gals that they commission something.

Many artists don’t like commissions, but I love them. Maybe it’s because my collectors are such a self-selected group who share my sensibility, and we both understand from the start that it’s my vision they’re after. I’ve never once had someone try to micromanage me as I worked. What would be the fun in that?

What I did do is ask what it was they loved about Wonderful World. They said it was the feeling of abundance and hospitality; the anticipation of sharing one’s home and food with guests who are about to arrive. The fact that it is an abundance of weird, mid-century, overengineered food just makes the people more endearing (you almost forgive them for living in such a pornographically modernist palace.) Which all made sense, given that these gals, in addition to being residential real estate moguls. are enthusiastic and frequent hostesses.

So the food was a given (and I LOVE painting food) but I also intuited that the structure of the piece, which pops the table and the food into the space you’re standing, was also integral to the draw of the piece. I’d made Wonderful World on two attached panels: I covered the top one in a striped fabric and formed the couple’s outfits out if it. The bottom panel I cut by hand to match the curve of a round tablecloth, which as a bonus was trimmed in classic dingleballs. I covered the bottom panel with a piece of the tablecloth, lining up the bottom with the bottom of the panel. The shadow that curves across it is translucent paint, which gives the illusion of  the table jutting into the room. The top half of the table is painted to match the tablecloth. This whole construction was an idea I’d been wanting to revisit anyway, so I decided to try something similar for the commission.

I started, as usual, with the house.

I based it loosely on a photo from a Better Homes and Gardens decorating book from the 1960’s, much edited and simplified. (I really just liked the staircase.) Then I had to go looking for the right characters. The short list of potential co-hostesses is on either side of the drawing below. As you can see, I made reversed versions of each gal in order to try them out on both sides.

I drew a couple of them in the right scale and pinned them to the drawing. The one on the left was a keeper, the one on the right not so much. Her bending down so steeply seemed a little weird, and the hand going missing behind the table makes her look like she’s going to lift it with one hand.

The next one worked much better, but the hair was going to have to go. Too dowdy.

The fabric is usually kind of an agonizing choice, especially when I need to choose two of them. I was fairly certain I wanted to use this odd, scallopy Finnish tablecloth I had for the table, but getting them into the right outfits and somehow tying it all together chromatically would be a challenge. I ended up using a piece of the same striped fabric that I had left over from the painting of ten years ago, turned horizontally this time.

Here is the bottom panel turned on its back on the work table. Ten years ago, I’d cut the curve with a small Japanese handsaw, but this time around I used the whole thing as an excuse to buy a jigsaw. (Who knows what other wacky shapes I might want to paint in when I finally move on from circles?)

Here it is a few stages in, when I was ready to start blocking in the food.

The final piece can be seen on my commissions page.