They do get all the good architecture. Last Friday my UW Drama drawing class went on a little field trip across the street to Paccar Hall, home of the Foster School of Business. There’s an abundance of glass and steel, and a sweeping overlook of the bustling cafeteria. Our model posed on the sleek staircase, and down below in the atrium while we drew her from above, peering over the edge through the glass wall.

For some of the students, it was the first time drawing a model in such a busy, perspective-heavy environment. Here’s one successful sketch, done on gray paper in black and white pen by the lady in the purple sweater. 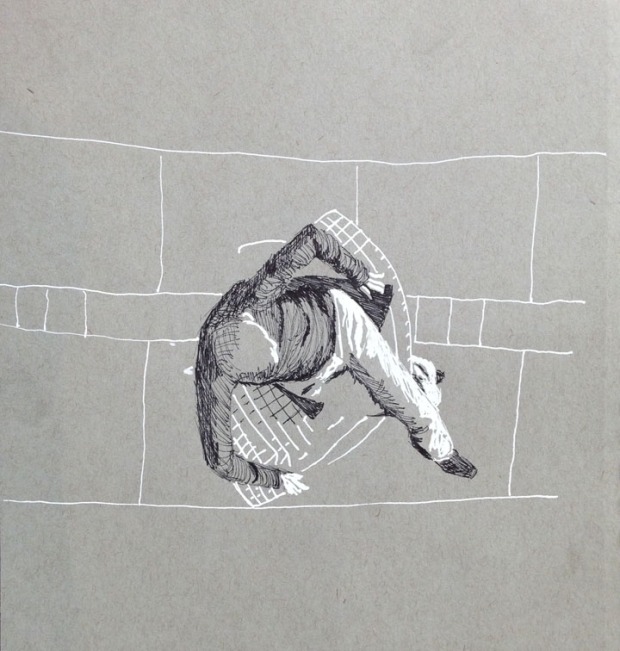 An unsuspecting business student (or some other kind of student who just likes hanging out there) inadvertently  modeled for us as well, adding some context and a nice visual counterpoint.

In the film “Drawing on Life“, one of the sketching architects they interviewed estimated that a stranger in a public place will “pose” for you for about three minutes before moving. This reading woman posed a little longer. In my experience, if the person is stuck waiting, in an airport, say, they will eventually go back to the same position so you can finish your drawing. This one is unfinished only because I had to go and help other people with their drawings.

The angles and long depth of field posed challenges, but also provided some guides for placing the figure, and for measuring and proportion. Someone asked me where to start, the figure or the ground. The real answer is “both,” but that wouldn’t have been very helpful. As a practical solution, I told him to start with an obvious straight line that intersected the figure, horizontal or vertical first, then move on to the oblique lines that you have to visually measure.

Shifting your focus back and forth between figure and ground does not come naturally. We’re hard-wired to focus on a single item in our overcrowded visual environments. Those of us who stopped to gaze at the intricate patterns made by the grasses of the savannah were eaten by lions before they could reproduce. Which means we are basically descended from philistines, which should surprise no one.

These students, focusing diligently on the shapes and shadows before them, are in very little danger of being eaten by wild animals,  but I suppose someone could steal that coffee that’s just sitting there.