My first food paintings were of eggs. Lots of eggs. Eggs distributed one to a plate, eggs enshrined in stainless steel bowls. I was working out, among other things, my angst-ridden resistance to the cult of motherhood and its reproductive mandate. I had just begun to pilfer 195o’s magazines for imagery, and at the time I was particularly struck by how busy all the ladies pictured in their pages were with countless projects —shining floors, whipping up cakes, contemplating their kitchen cupboards—but really, it all seemed to me to be just a sublimation of the main message: Their true and only purpose in life was to make more tiny Americans. It didn’t seem to me, in the 1990’s, that the message had altered much. It still doesn’t.

On a visit home to Cleveland around this time, I asked Mary Beth, my very brilliant but troubled oldest sister, whether she would be attending the following day’s family Christmas gathering. She replied cryptically, “Of course I’m coming: I’m making . . .deviled eggs.” She slowly drew out the name of the favorite midwestern delicacy, lingering on the “devil”, imbuing it with a  significance I could only guess at. My cousin, an academic who is never at a loss for meaning, pointed out that perhaps here lay, in the humble deviled egg, my next subject matter. Take the egg—embodiment and symbol of the female’s power to create life—remove its core, fluff it up with mayonnaise and reassemble it into a decorative appetizer, a mere warmup to the main event of manly meatitude. The project of the patriarchy in a nutshell. Or eggshell.

I’m Making Deviled Eggs (1999) was something of a break-out painting. It won first prize in a juried show in 2000, which led to my first commercial gallery representation. It was the first time, after working in near-isolation for ten years, that I felt that my art was of interest to a wider world, the first hint that I could have a professional career at it, and maybe even one day make art full time. I had named the painting in an ironic nod to my sister’s cryptic quote. Mary Beth died in 2010 under rather unhappy circumstances. In retrospect, given what a pivotal moment this piece represents, artistically and professionally, I’m happy I did. It feels less ironic and more like an homage to a very smart woman born at the wrong time, whose potential, like that of the deviled eggs, was never fully realized.

I’ve since expanded the menu considerably, but I’m still drawn to those highly decorative concoctions that seem to be channeling an enormous amount of female creativity into bizarre and ephemeral projects. The theme of gutting something, mixing the innards with other ingredients, primarily mayonnaise, and stuffing them back into their original container to create a similacrum of the original—it recurs again and again. (Twice-baked potato, anyone?) It is, come to think of it, also an apt description of what I myself do with the ephemera of the American Dream.

My work will be featured in the upcoming exhibition Face First at the Bainbridge Museum of Art, on lovely Bainbridge Island, Washington. Curated by Greg Robinson and Amy Sawyer,

I have been working from 1950’s and 1960’s magazine ads for almost thirty years. My temporal relationship to the material is strange when you think about it: The first time I started cutting up and mining for material an “old” magazine that I’d found in a thrift store, the images were thirty or forty years old. Now they’re sixty or seventy years old, which seems more like an antique. Antique that they might be (and I’m getting close to that myself by that standard), I’m not precious about them. They are my still-living source material. I tear out things I find interesting or telling or oddly relevant, or maybe I just like the colors. I file the torn-out images in rough categories. I have a drawer overflowing with manila file folders of ragged magazine photos with labels like People, Children, Kitchens, Decor, Patios, Lawns, Pools, Appliances, Food, Cake, Disembodied Hands. That’s basically my system, and when I’m working out a composition and I need, say, a husband for someone, I look through the People file until I find a few candidates for the right guy, in the right pose, with the right clothes.

Some people just come in handy, time and again.

The little boys above were posing with their “My Fair Lady” outfits with a row of little girls in equally silly garb when I came across them in a magazine, McCalls maybe. When I used them in a painting, I placed them out in the wild to better showcase their feral quality. I used a fabric with an overall pattern of olde timey maps of a vaguely colonialist flavor, which seemed like a perfect match for the little suits of little capitalists in training.

I felt a particular bond with the little boy on the left. Steve said he looked like Drake Deknatel’s images of himself as a little boy, which he’d painted right before he died. Indeed, the painting’s eventual owner, with no knowledge of that conversation or of even of Drake himself, told me that that boy was her favorite one, and then spontaneously dubbed him “Frederick”, which, chillingly, happens to have been Drake’s real name.

But I digress. A few years later, I snuck the same boy into a newspaper that a smoking dad is holding in this piece, Cowboy Diplomacy. He’s at the top left.

And here he is again, looking over the fence at an execution in an homage to Manet’s homage to Goya.

I finally gave him a solo show about two years ago, overtly acknowledging the homage to my late mentor. He’s changed a bit since I started painting him, and he seems happiest in his mayhem now. I think Drake would have liked this one. 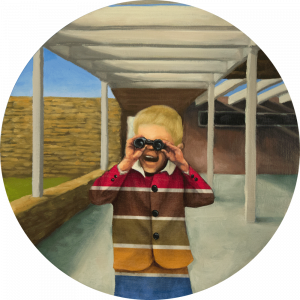 Last month I had a nice chat with Jeffrey D. Shulman, a professor at the Foster School of Business at the University of Washington, on his Seattle Growth Podcast. In Season 6, he’s focusing on how people find and build community in a changing city. We mostly talked about ’57 Biscayne in 2011 and the Good Arts Building, and how those interlocking communities were formed and what I learned along the way. Of course, he also asks the inevitable “how has Seattle changed?” I’ve been here almost thirty years, but since I am rather ornery, I talked instead about what’s managed to stay the same. There are two interviews in the episode; the first one is interesting, but if you want to skip to mine, it starts at 33:44.

I also was a guest on the show a few years ago, along with my Good Arts partners Ali Ghambari and Greg Smith. We described how we came together from very different perspectives to create the wonder that is the Good Arts Building. Jeff had interviewed us separately and used the interview with Greg in one episode. He was about to scrap the rest, when the 2016 election happened. He felt like he really, really needed a heart-warming story of people setting aside their differences to work together to do good in the world—that’s us!—so he produced a Very Special Episode out of the outtakes.

PLEASE JOIN US FOR A CLOSING PARTY AND INDUSTRY NIGHT ON WEDNESDAY, JULY 17 FROM 5-7 PM!

For the sixth year in a row, my colleague Dara Solliday and I will be organizing and curating the 100 under $100 show at ’57 Biscayne. I love doing this. We gather art from a whole bunch of artists we know, and usually a few that we don’t, all of it priced under $100 (as the name would imply) and wrestle it into a surprisingly coherent show. The first year we put  it on, it was kind of thrown together at the last minute (we frantically raided a lot of our neighbors studios to get to 100 pieces) but nevertheless went pretty well. There are collectors from that first event who still come back year after year. We’ve got it down to a system now: The work has to be ready to hang; the artists have to drop it off at prescribed times and enter their own information into a form (I spent several evenings sliding down the hall with my laptop on a chair with casters as Dara fished out post-its and tried to match them to artworks); and we’ve gotten really good at herding a big fat mishmash of art into aestheically pleasing groupings that make their own kind of sense. In other words, it’s a real show now. And until the day we hang it (with some help from other Biscaynitos), we really have no idea what it’s going to look like.

One of the many pleasures of this show is giving some newer artists the opportunity to show their work and actually sell it. However, many established artists look forward to it as well because it’s a chance to do something outside of their known style or medium, to play around a little bit.  We can take risks with something brand-new, or conversely, dig up something old. I’ll be doing the latter this year. I found some oil studies for paintings from the turn of the century—studies that were actually done after the works themselves were in progress. The paintings have long since left my life and gone to good homes, and the studies are like memories of them. They’re also fresher and looser and less precious, from a time before I learned to be loose in my “real” work.

Saturday, April 27 is Independent Bookstore Day, a day set aside to celebrate all those havens of civilization and culture where you can browse in the old sense, touch and leaf through physical books, and talk to real people who read a lot.

In Seattle, the celebration includes the Passport Challenge, in which one tries to visit all 25 participating bookstores in one day. Arundel Books of Pioneer Square is one of them. Their house imprint, Chatwin Books, who published my Fabric of the American Dream in 2015, will be presenting a series of readings by Chatwin authors at the store that day.

As one of their art book “authors,” rather than reading from my book I will be talking about the paintings that are in it; about my subsequent work; and then about two artists of my choosing, Edouard Manet (of course) and Norman Rockwell (about whom I wrote a piece for ArtDish a few years back).

My talk starts at 3:30 PM PDT. The event will be live-streamed on Facebook, but to reward actually showing up in person, which is kind of the point, champagne will be served at the bookstore. 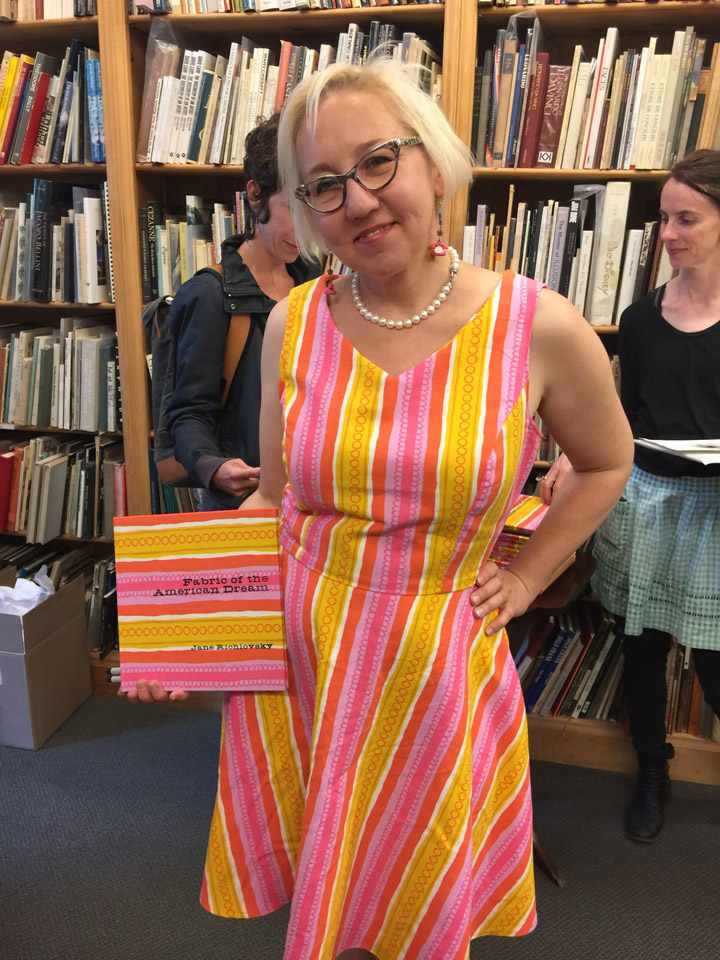 Recommended by The Stranger as one of the top shows to see this spring. 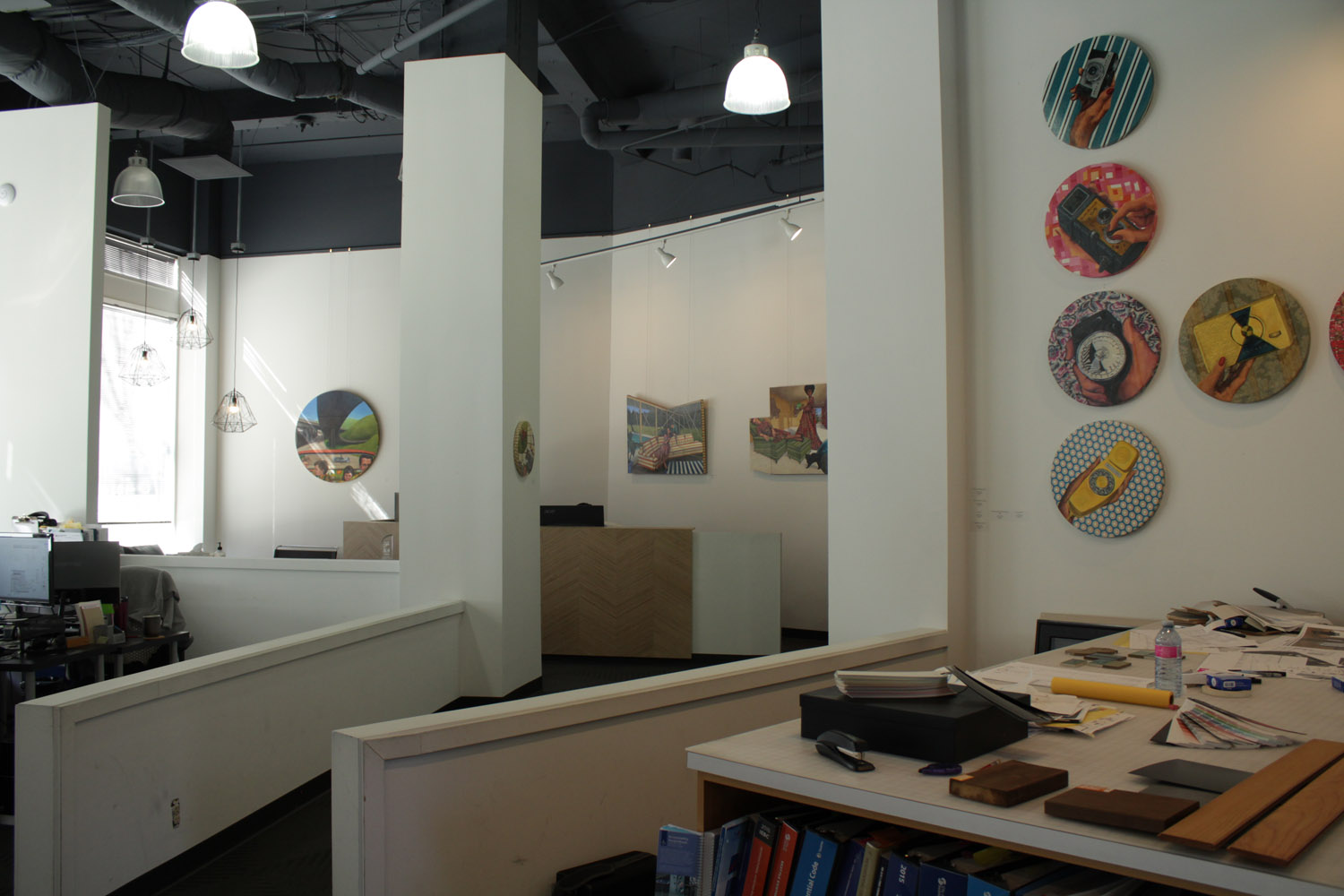