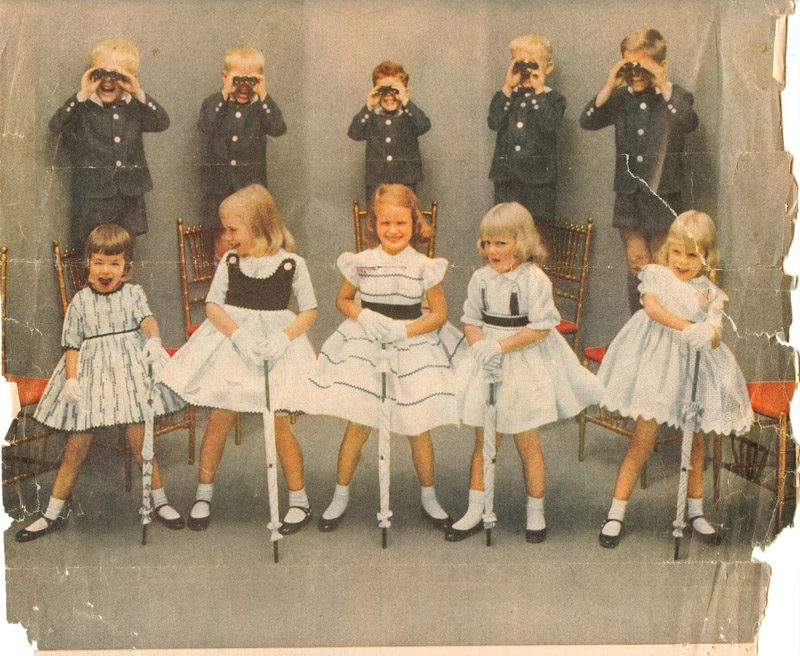 I have been working from 1950’s and 1960’s magazine ads for almost thirty years. My temporal relationship to the material is strange when you think about it: The first time I started cutting up and mining for material an “old” magazine that I’d found in a thrift store, the images were thirty or forty years old. Now they’re sixty or seventy years old, which seems more like an antique. Antique that they might be (and I’m getting close to that myself by that standard), I’m not precious about them. They are my still-living source material. I tear out things I find interesting or telling or oddly relevant, or maybe I just like the colors. I file the torn-out images in rough categories. I have a drawer overflowing with manila file folders of ragged magazine photos with labels like People, Children, Kitchens, Decor, Patios, Lawns, Pools, Appliances, Food, Cake, Disembodied Hands. That’s basically my system, and when I’m working out a composition and I need, say, a husband for someone, I look through the People file until I find a few candidates for the right guy, in the right pose, with the right clothes.

Some people just come in handy, time and again.

The little boys above were posing with their “My Fair Lady” outfits with a row of little girls in equally silly garb when I came across them in a magazine, McCalls maybe. When I used them in a painting, I placed them out in the wild to better showcase their feral quality. I used a fabric with an overall pattern of olde timey maps of a vaguely colonialist flavor, which seemed like a perfect match for the little suits of little capitalists in training.

I felt a particular bond with the little boy on the left. Steve said he looked like Drake Deknatel’s images of himself as a little boy, which he’d painted right before he died. Indeed, the painting’s eventual owner, with no knowledge of that conversation or of even of Drake himself, told me that that boy was her favorite one, and then spontaneously dubbed him “Frederick”, which, chillingly, happens to have been Drake’s real name.

But I digress. A few years later, I snuck the same boy into a newspaper that a smoking dad is holding in this piece, Cowboy Diplomacy. He’s at the top left.

And here he is again, looking over the fence at an execution in an homage to Manet’s homage to Goya.

I finally gave him a solo show about two years ago, overtly acknowledging the homage to my late mentor. He’s changed a bit since I started painting him, and he seems happiest in his mayhem now. I think Drake would have liked this one.