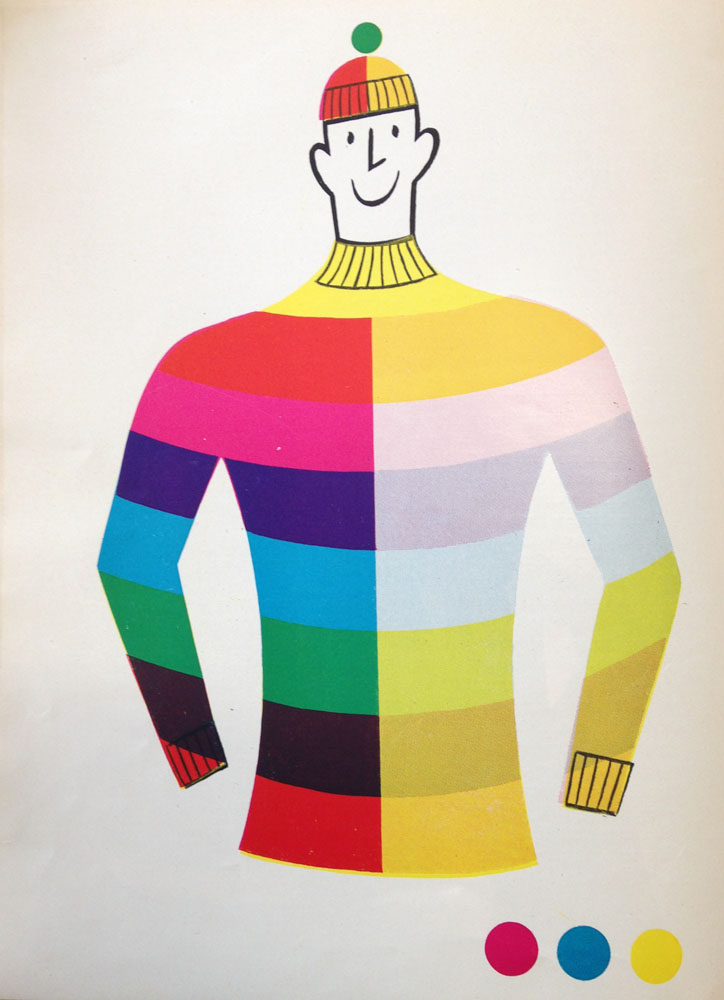 Process colors: Cyan, Magenta, Yellow, Black. These four dyes are in your home printer, in the printed magazines, flyers, business cards, t-shirts, you name it. Four, just four, colors are distributed on the page in the form of dots which your eye perceives, sending signals to the brain, which mixes the dots into seemingly every color in the visible universe. Which of course they are not, but the agreed-upon fiction in the world of reproduced color is that if CMYK can’t make ’em, we don’t need ’em.

I’m not the first artist to find this fascinating. Most famously, Roy Lichtenstein reproduced the crude benday dots of the Sunday newspaper, but even earlier Georges Seurat referenced them in his paintings. Seurat’s concern, like many of his Impressionist pals, was optical. He liked the idea that your eye (actually your brain) could take these discrete meaningless pieces of color information and extrapolate a whole world: three-dimensional form and even beauty. Lichtenstein blew them up and called our attention to the abstract patterns we were actually looking at when we read an image of a comic book damsel in distress.

My own interest in them comes from the fact that I’ve been mining old mass-produced color print sources for my work for thirty years. Particularly, I revel in the truly weird and unlifelike photographs of food in cheaply-printed magazines and cookbooks. I sometimes use a photographer’s loupe to see what-all colored dots make up the putty green of midcentury iceberg lettuce or a nuclear cantaloupe.

For years, I looked mainly out of curiosity, then I’d forget about what I’d seen and mix the colors for the painting out of other, more traditionally painterly pigments. Recently I decided I wanted to use the process colors themselves, in the form of their artist-grade oil paint approximations. I think of it as performing the color separations in my brain and putting the pieces together on paper or canvas.

Colored pencils allow for more discreet units of color that mix optically, so I’ve been working with those in life drawing sessions. The first stages of a drawing done this way look really weird, the people all bright yellow with random spots of purple. As the marks accumulate, the drawing starts to resolve itself into something approaching believability.

Watercolors are an intermediate step. They dry faster and can be mixed more loosely and spontaneously than oils, and layered quickly as they dry, maintaining some of their CMYKness. The black (“k”) here is pen & india ink.

Now for the really nerdy part. I do want to paint in these colors in oil. I already tend to work with limited palettes, that is, I mix most every color I need for a painting out of three particular (loosely-defined) primary colors and white. Over the years, I’ve created an extensive reference library of swatches out of many different primary combinations. (That may sound like I have too much time on my hands. Actually, it pays for itself in time spent painting rather than aimlessly mixing.)  So why not try the same process with my four new CMYK pals: a bright turquoisely blue, magenta, a cool yellow, and black.

(More about limited palettes in the post about Color Boot Camp.)

I painted my two fake album covers in this palette, which makes sense, because real album covers would be printed with CMYK process colors. The gimmicky scenarios play on the whole idea of printed vs. painted color.

The piece I made for Juan Alonso’s benefit party also utilized these colors. Like the Ersatz Family Singers, it incorporates a xerox transfer.