My UW Drama grads and I made our annual pilgrimage to the spectacular Seattle Central Public Library in November, accompanied by the ubiquitous and always-stylish model Amanda, dressed to match the architecture in a pattern of multicolored trapezoids that referenced the steel grid covering the building.

We met up at nine and had an hour to kill before the library opened its doors, so we engaged in a bit of guerilla urban sketching in a large office building across the street. Usually this sort of thing goes well for me, attracting generally positive attention and curiosity. This time it got me in trouble with the building manager.  Talking fast yet amiably, I managed to successfully convince her that we were harmless, and by the end of the conversation she was dragging chairs out of the cafe for us to sit on. The epic Henry Moore sculpture in front of the building had apparently given me a falsely arty impression of the building; like many corporate glass and steel towers, it boasts an impressive, artfully furnished, and utterly underused lobby. Heck, we were doing them a favor, “activating the space” as they say in urban planning parlance.

At the library, by contrast, we were warmly greeted by event services manager Cara Cronholm, who has been welcoming my classes there for the last several years. We began in the fourth-floor shiny red organically undulating hallway, where the utter strangeness of the space forced everyone to actually look at their surroundings rather than fill in from whatever is in their head. You can’t  make this stuff up.

For the second pose in this area, Amanda stood down a narrow side hallway from us, backlit by the capricious Seattle winter light projecting through the harlequin grid of the library’s exterior. Everyone had to sort out and filter the cacophony of colored light, reflections, and reflections of reflections to interpret the scene for themselves, resulting in a great variety of compositional and material choices. 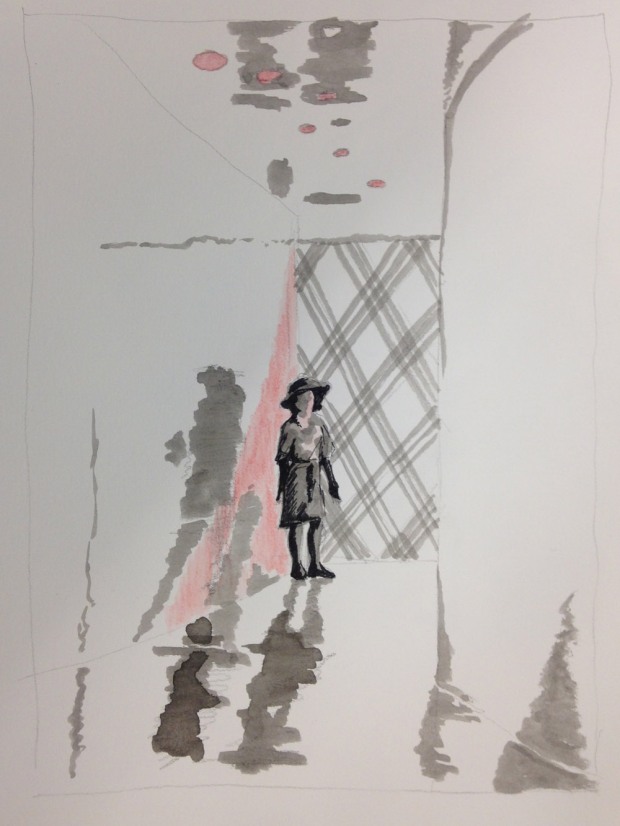 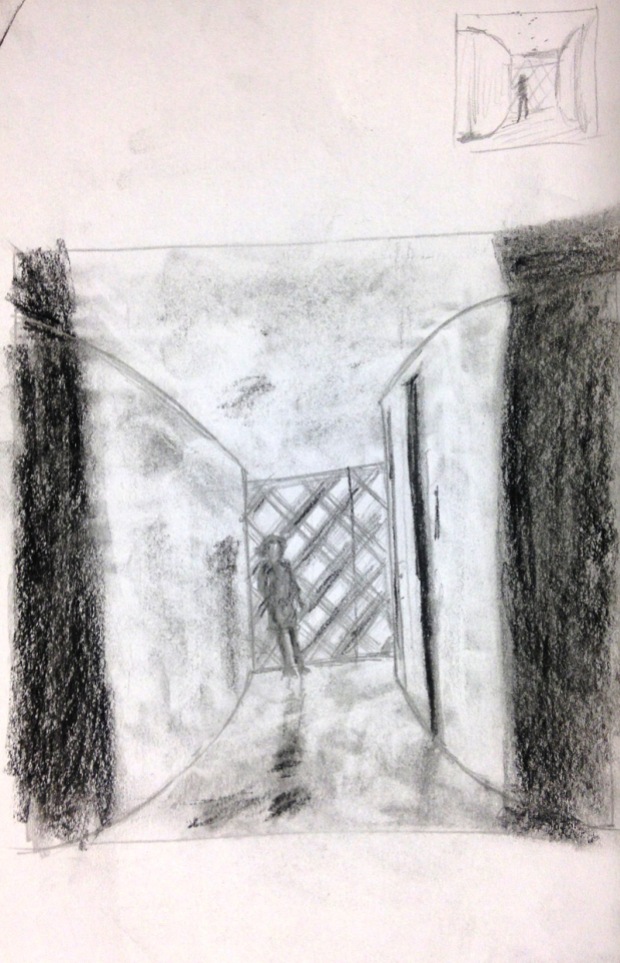 We were joined by my pal Jeff Scott, a painter and scenic artist who will be teaching these same students theatrical set painting this winter. Claiming to be rusty at drawing, he nevertheless came up with this forced-perspective stunner:

Onward to the tenth floor to visit the Reading Room , although I don’t know how anyone can get any reading done surrounded by that visual feast of geometric pattern, light, and encompassing views of the city all around you. 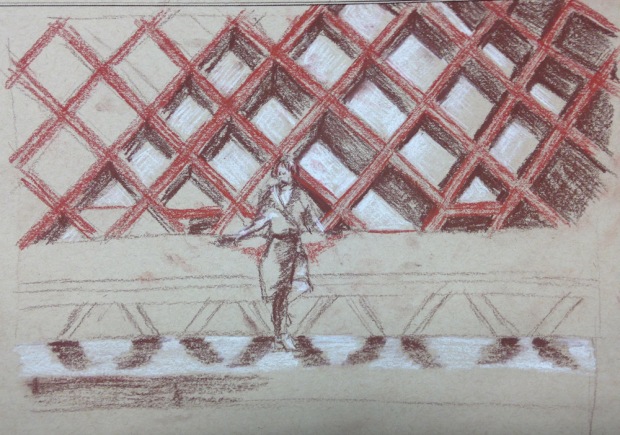 While there’s plenty to be said for the time-honored practice of academic study of the human form in a controlled studio setting, humans exist in historical times and physical places. Judging from the work done by even the least-experienced drawers among us, inspiration for theatre, painting, and any other visual art can be had in abundance just by getting out in the world and drawing them there.