Poor Paolo Uccello (1397-1495). He could have been a contender. According to Giorgio Vasari, Uccello would have been “the most delightful and inventive genius in the history of painting” had he not wasted all his time and talent away on the excessive pursuit of– was it fast women, drink, hard drugs, or gambling?  – no, the worthless undertaking upon which Uccello wasted his life was…Perspective. Perspective ruined poor Paolo’s career and on top of that, “did violence to his nature”, making him “solitary, eccentric, melancholy, and impoverished.”  He had trouble, with a capital T and that rhymes with P which in quattrocento Florence that apparently stood for Perspective.

Now I read this ominous passage in “Lives of the Artists” within the past year. Did I pay any attention to the obviously-well-thought-out advice of Giorgio Vasari, the father of Art History, that had been passed down to me over the ages? Did I heed this wisdom that had survived 500 years of wars, floods, famines, the rise and fall of empires, to appear to me in my native tongue in my own century in cheap, readily-accessible paperback format ?

Of course not. There came a day I found myself working on a painting that had some serious problems. They were the kinds of problems I described in a previous post, Lose the Christian Theme Park. The various parts just weren’t serving the whole.  I was much too attached to these utterly extraneous and unrelated – if individually interesting – parts. The painting was a mess and it needed a total makeover. 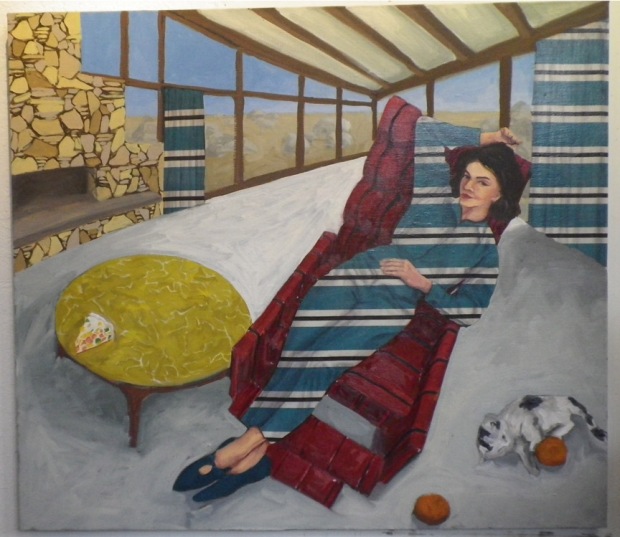 After changing the colors and patterns of both floor and table, the type and size of the dessert, and the fireplace a dozen or so times EACH, I decided I needed to paint everything out in white except for the chair and the fabric bits, i.e., the lady and the curtains.

Once I rid myself of the ceiling and windows, the space of the painting became a blank slate. Almost: the bits of striped curtain, remnants of past choices, were exerting undue influence on my possible choices for the painting’s future. Their angled tops and bottoms still hinted at the old perspective. So they, too, succumbed to the white paint.

It became clear to me that since the woman is viewed from above, what she required was a vast and memorable floor that seemed to stretch on forever, like the suburbs in which she lived. I wanted the space of the painting to be believable but slightly dizzying. It needed tiles, the tiles needed to recede precipitously, and they needed vanishing points to approach. Normally I work these problems out in the drawing stage, but this was a remodel. Drawing lines with a ruler pointing toward vanishing points drawn on the wall, my usual method, felt cumbersome and not exact enough. I had a roll of twine lying around so I began laying out the tiles with it, taping the twine to the edges of the painting and pinning it down at the vanishing points.

Sarah Vowell, in writing about Civil War re-enactors, observed that they all considered anyone less obsessed with authenticity than themselves a poser, and anyone more obsessed than themselves a wingnut. This observation can apply to any undertaking that is difficult, interesting, and/or obscure enough to allow for large quantities of time to be spent, some might say wasted, on it. Vasari placed Uccello firmly in the wingnut category. There was a time when I would have tried to wing the spacing of the tiles, but now I was headed in a dangerously Uccello-like direction. Winging it was for posers.

For you posers out there, the widths of the tiles as they recede in space diminish along lines that all converge on a vanishing point on the horizon line. Those lines are the strings. They meet at two pushpins on a line drawn on the wall slightly below the top edge of the painting, the horizon line, which also corresponds to the viewer’s eye level, which is somewhat above the lady’s eye level since we are looking down on her.

But the tiles are also going to appear shorter as well as narrower as they recede. Here’s where it gets fun. The way to determine how much shorter the tiles should get is to find the midpoint of a sample square. You do that by drawing two lines joining its opposite corners, making an “X” across the tile. The lines meet at the midpoint. If you were looking at a real tile and you actually drew the lines with a sharpie, the midpoint would be a point actually equidistant from the edges.

However, we want the midpoint of the imaginary tile in the imaginary world of the painting. That imaginary midpoint will be slightly closer to the edge of the tile that is supposed to be farther away from us.

The midpoint of two matching tiles is the same as the midpoint of one giant tile the length of two of them together. If you draw a line from one corner through this midpoint-of-them-both, you get to the far end of the second tile.

Then you can draw a line from the near corner of the second tile, through the midpoint of its far edge, and find the end of the third tile, and so on, until you have spent your life making imaginary tile floors that recede into infinity. Vasari might regard you as a wingnut but Uccello would probably dismiss you as a poser.

Here is the finished painting, a world in which even the lines of the hors d’oeurves meet at a vanishing point on the horizon.

As for Vasari and his forecast of gloom, I’ve not yet become solitary, (more) eccentric, melancholy, or even impoverished. Those things could still happen, but I did sell the painting.