Taste of the American Dream 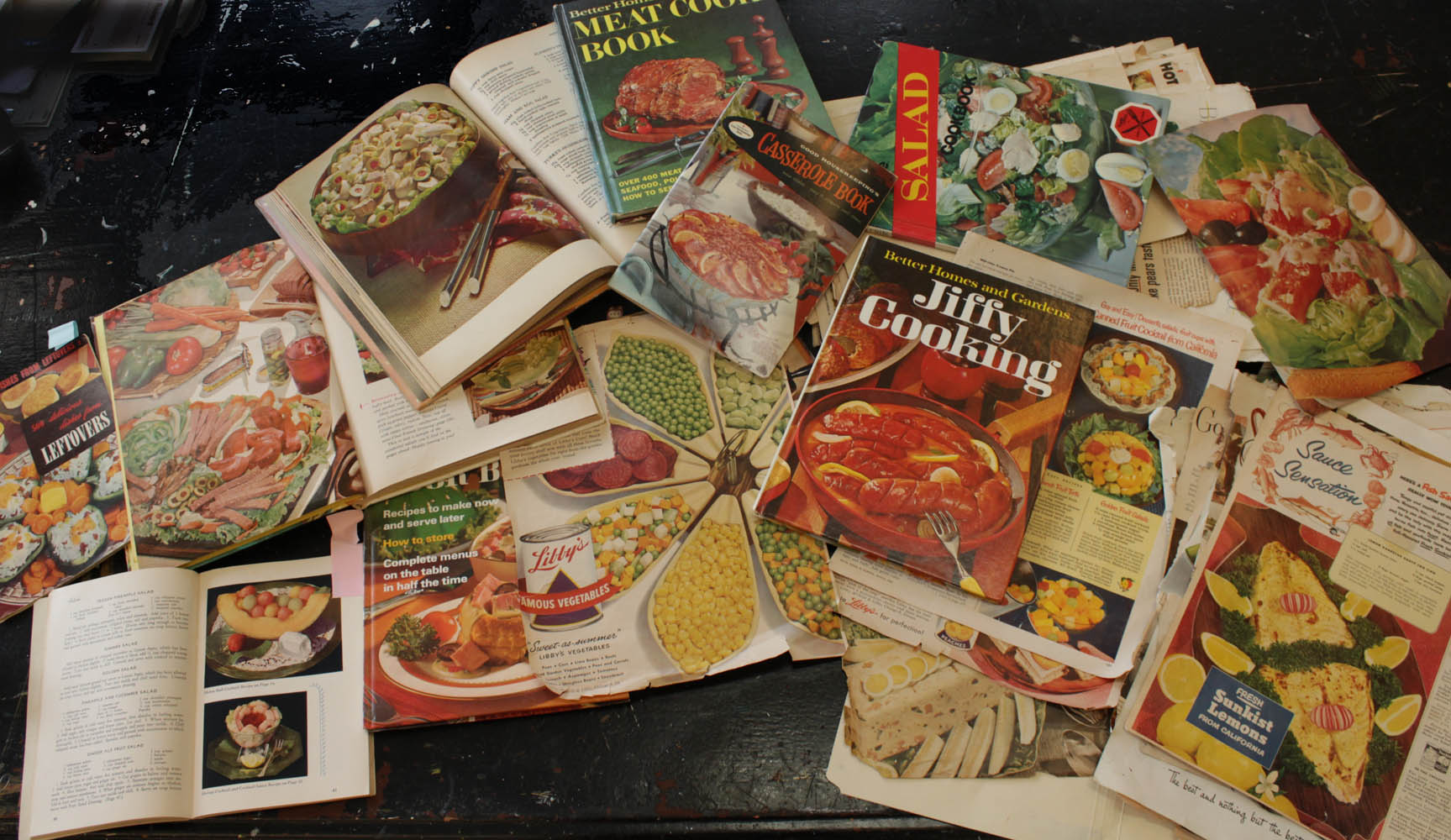 My first food paintings were of eggs. Lots of eggs. Eggs distributed one to a plate, eggs enshrined in stainless steel bowls. I was working out, among other things, my angst-ridden resistance to the cult of motherhood and its reproductive mandate. I had just begun to pilfer 195o’s magazines for imagery, and at the time I was particularly struck by how busy all the ladies pictured in their pages were with countless projects —shining floors, whipping up cakes, contemplating their kitchen cupboards—but really, it all seemed to me to be just a sublimation of the main message: Their true and only purpose in life was to make more tiny Americans. It didn’t seem to me, in the 1990’s, that the message had altered much. It still doesn’t.

On a visit home to Cleveland around this time, I asked Mary Beth, my very brilliant but troubled oldest sister, whether she would be attending the following day’s family Christmas gathering. She replied cryptically, “Of course I’m coming: I’m making . . .deviled eggs.” She slowly drew out the name of the favorite midwestern delicacy, lingering on the “devil”, imbuing it with a  significance I could only guess at. My cousin, an academic who is never at a loss for meaning, pointed out that perhaps here lay, in the humble deviled egg, my next subject matter. Take the egg—embodiment and symbol of the female’s power to create life—remove its core, fluff it up with mayonnaise and reassemble it into a decorative appetizer, a mere warmup to the main event of manly meatitude. The project of the patriarchy in a nutshell. Or eggshell.

I’m Making Deviled Eggs (1999) was something of a break-out painting. It won first prize in a juried show in 2000, which led to my first commercial gallery representation. It was the first time, after working in near-isolation for ten years, that I felt that my art was of interest to a wider world, the first hint that I could have a professional career at it, and maybe even one day make art full time. I had named the painting in an ironic nod to my sister’s cryptic quote. Mary Beth died in 2010 under rather unhappy circumstances. In retrospect, given what a pivotal moment this piece represents, artistically and professionally, I’m happy I did. It feels less ironic and more like an homage to a very smart woman born at the wrong time, whose potential, like that of the deviled eggs, was never fully realized.

I’ve since expanded the menu considerably, but I’m still drawn to those highly decorative concoctions that seem to be channeling an enormous amount of female creativity into bizarre and ephemeral projects. The theme of gutting something, mixing the innards with other ingredients, primarily mayonnaise, and stuffing them back into their original container to create a similacrum of the original—it recurs again and again. (Twice-baked potato, anyone?) It is, come to think of it, also an apt description of what I myself do with the ephemera of the American Dream.